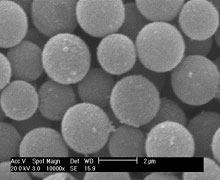 The suspension of core shell type magnetic polystyrene microspheres are brown. The structure of core shell type is with monodisperse polystyrene microspheres coated by a thin layer of magnetic nanoparticles(Fe3O4). The dispersant is phosphate buffer. It has good mono dispersity and magnetic response. Sedimentation will happen after long time unused. Before use, shake or ultrasonic dispersion is suggested.