Scientists at Imperial College London have developed a system to quickly detect trace amounts of chemicals like pollutants, explosives or illegal drugs.

The new system can pick out a single target molecule from 10,000 trillion water molecules within milliseconds, by trapping it on a self-assembling single layer of gold nanoparticles. 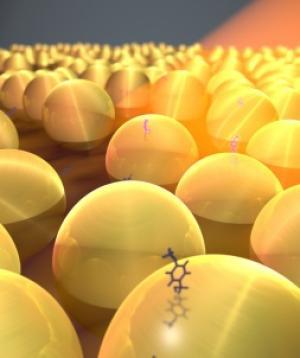 The team of scientists, all from the Department of Chemistry at Imperial, say this technology opens the way to develop devices that are compact, reusable and easy to assemble, and could have a range of uses including detecting illegal drugs, explosives, pollutants in rivers or nerve gases released into the air. Results of the research are published this week in Nature Materials.

In one potential use, such a device could detect tiny traces of explosives or other illegal substances left behind by criminals on the surfaces they touch. The advances made by this team would help law enforcers to identify and deal with such activities involving illegal substances.

Research co-author, Michael Cecchini, said: “Our system could solve a key problem of reliable and portable chemical testing for use in the outside world. It is very sensitive and could well be used to look for very small amounts of a specific molecule even in busy, public areas.”

The target molecules are identified by an effect called Surface Enhanced Raman Scattering (SERS) of light. This technique, which has been around since the late 1970’s, works because each molecule scatters light in a unique way. Previous research has shown that the signal can be amplified by catching molecules in a particular way on a layer of metal nanoparticles. However, these sheets are complex to manufacture.

The scientists overcame this problem by dealing with interfaces of two liquids that do not mix, such as water and oil, or water and air interface. By manipulating the electrical charge of the gold nanoparticles and the composition of the solution, they were able to create a situation where the particles line themselves up at the interface between the two non-mixable liquids, or between a liquid and the air.

“The trick to achieving this system’s sensitivity to the target molecules was in finding the conditions at which nanoparticles would settle at the interface at close distances to each other without fusing together,” commented another co-author Jack Paget.

If the gold nanoparticles are disturbed, they spontaneously arrange themselves back in the correct way make the device more robust than those made rigidly arranged particles. Research co-author, Vladimir Turek, said: “The system shows real promise for detectors for use in rough outdoor environmental and defence applications, since the liquids and nanoparticles can be easily replaced to regenerate the device.”

This research is supported by funds from the UK’s Defence Science and Technology Laboratory (DSTL) and the European Research Council (ERC) starting investigator grant. The cross-disciplinary team in the Department of Chemistry at Imperial is led by Dr Joshua Edel, an expert in applied nanoscience, and Professor Alexei Kornyshev, professor of chemical physics and expert in condensed matter. They are corresponding authors of the study, alongside research postgraduates Michael Cecchini, Vladimir Turek and Jack Paget.